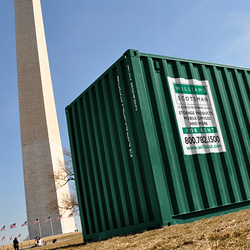 Government agencies – whether federal, state or local – are not unlike private-sector businesses when it comes to the need for modular space solutions. Construction, renovation, special events and unforeseen circumstances that require flexible space options occur in every sector, whether private or public.

The government, however, operates quite differently than privately run organizations. Purchasing requirements are more stringent, security concerns are often heightened and successful project completion is judged not by just a few executives, but by a sea of constituents.

Experience in navigating this complicated business landscape is an absolute must and WillScot has just that. We’ve maintained a General Services Administration (GSA) Contract since 2002 and frequently work with government agencies of all sizes.

Here are some examples of how modular space solutions help government agencies successfully navigate the “business” of public service:

The bidding process can be one of the most time-consuming, controversial aspects of any public project. Working within a GSA Contract allows the project to get off the ground, eliminating bidding hassles. All pricing for WillScot modular space solutions are already included in our GSA Contract. That means government agencies can get straight to work without having to spend time negotiating over pricing to find the lowest bidder. What’s more, procuring services through our GSA Contract means cost savings, ranging from 2 percent for items that list from $1 – $5,000 to 6 percent for items that list for more than $250,000.

Looking to create an entire local government infrastructure in less than two months? Want to host 1.8 million people for a week? Interested in building a mini-city in 210 days? We’ve done that, and we can help.

We have the know-how that only comes from more than a half century of experience. Here are a few examples of how WillScot has helped government agencies in recent years:

– When the City of Rehoboth, Delaware – a popular summer beach destination – decided in late 2015 to demolish its City Hall, police station and courthouse in favor of new buildings, they needed to move quickly. WillScot won the public bid, which gave us from Halloween until December 10 to install 7,680 square feet of modular space. Our solution included adding quadruple-wide modular office space units to our existing units onsite. We created everything from a courtroom and lobby, to a police headquarters, a locker room, holding cell and investigation rooms.

– Administrations change frequently (another reason that timing is of the essence), and we’ve even made administration change itself easier for those in government. U.S. President Barack Obama’s January 2009 inauguration drew an estimated 1.8 million people to Washington, DC. WillScot’s temporary steel storage containers were placed all over the National Mall to house materials needed for ceremonies, parades, concerts and traffic and crowd control, and our modular office space served as command centers for security and event personnel.

– Sometimes the needs of government are so big that collaboration is required. William Scotsman has worked alongside other companies to bring massive government projects to reality. For example, we were a subcontractor for a 210-day Army Corp of Engineers project to house 3,800 soldiers at the Biggs Army Air Force Field in Fort Bliss, Texas, building 350,000 square feet of office space.

Protecting the public won’t happen if the agencies charged with that task aren’t protected themselves. Quite simply, there is no reason a government agency should sacrifice its own security or the safety of its workers when making changes to infrastructure. WillScot works with agencies to safely install temporary solutions and meet important safety requirements. For example, we worked with the Naval Air Systems Command (NAVAIR) in Lakehurst, New Jersey, to expand their existing operations during a personnel surge. Here’s how we kept things safe:

Whether it’s a military barracks, field office, high-tech planning space, training facility or any other government need, WillScot has the inventory, flexibility and experience to help. Interested in learning more about what option is best for you? Speak to one of our representatives at 800-782-1500.